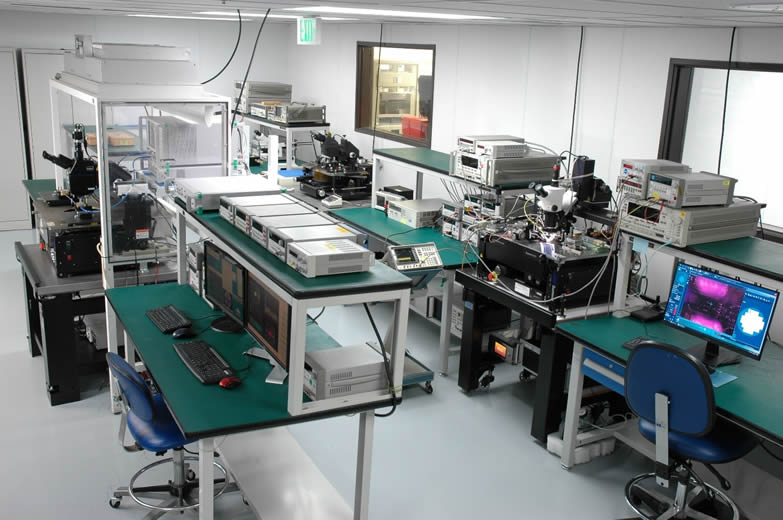 With the purpose of R&D and pilot production, this lab provides all the services required to meet the most stringent quality requirements of MMIC testing and device/component characterization in microwave-millimeter wave frequencies, with the support of resources available in-house:

Typical test equipment and accessories to support the testing work include the following:

Three probe stations are set up to perform MMIC testing in a variety of test configuration and criterions in millimeter wave frequencies.

Detail description of the probe stations is presented in the following sections. 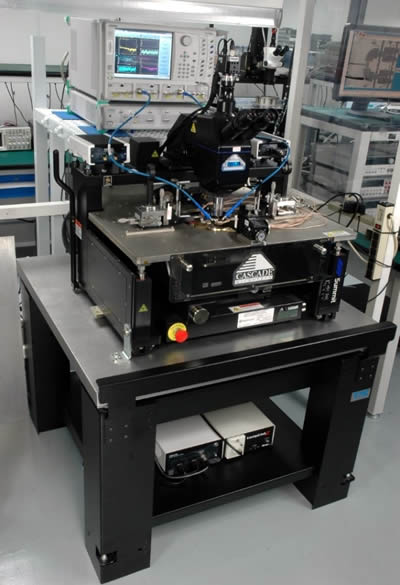 The test station setup (Figure 2) provides on-wafer probing capability in both CW (145 GHz max.) and pulsed modes (70GHz max.). Equipped with DC pulsers and RF pulse modulation, the test system can synchronize the DC and RF stimulus with a minimum pulse width of 200 ns, and DC level up to 250V/30A. Typical measurement setup and results are shown in Figure 3.

Figure 3. On-wafer probing in CW and pulsed modes are provided for MMIC evaluation and device characterization up to 145 GHz (left). A Ka-band MMIC amplifier is measured on-wafer in pulse-mode. Sample S-parameter data are obtained from 700 KHz to 69.5 GHz (right).

The thermal probe station (Figure 4) is capable of on-wafer probing with (high) temperature control. This semi-automatic probing system is equipped with a thermally insulated chamber and low-profile card holders targeting for MMIC production test, from 20 to 300 degree Celsius.

To reduce thermal effects in power testing, this probe station (Figure 5a) provides a low temperature chuck that can effectively dissipate heat generated by the DUT, and extract the ultimate performance of the power device. Supported by the Temptronic (TP3000A) refrigeration system (Figure 5b), the probe station is capable of characterizing devices at low temperatures where chuck temperature can be lowered down to -65°C. 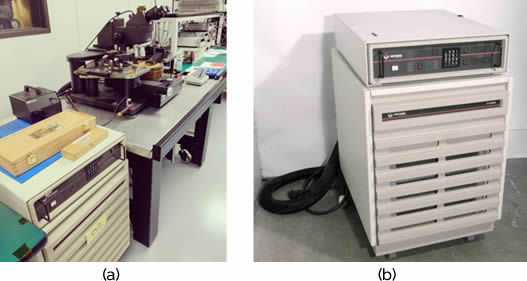 QuinStar is planning to add load-pull tuners (20 to 110 GHz) to the test set by the 2nd quarter of 2022. When configured with the load-pull tuners, the probing test set will provide real measurement of the non-linear behavior of a device across the full impedance plane. As a result, the load-pull data will facilitate engineers to obtain design solution with great accuracy and deliver millimeter-wave products of State-of-the-Art performance, a great thrust to new product development and company revenue.

We see a world of unlimited potential when real-time and critical information is readily available for decision making. Our work supports transformative technologies including autonomous vehicles, satellite communications, environmental sensing, quantum computing development, and the ever-expanding Internet of Things.

QuinStar exists to develop, manufacture, and deliver millimeter-wave and RF solutions. From high-level R&D efforts to requirements-driven program innovation to readily available catalog components, QuinStar is here to meet the exacting needs of our customers.

As individuals and as a company, our ability to achieve our mission hinges on the strength of our core values. At QuinStar, we are aware of our strengths and our challenges. We value the pursuit of mastery—from engineering to accounting to machining—we continuously strive to improve. We are accountable for our successes and for our failures; we learn and grow for both. We are a diverse company functioning in a global economy; respect binds us together. Finally, we value the spirit of tenacity, which we define as our solution-driven work ethic.
Page load link
Go to Top